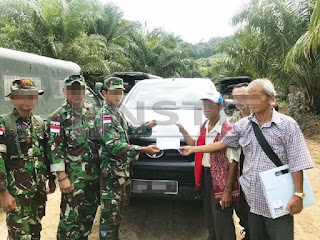 Indonesian soldiers handing the pickup to the villagers on Dec 14.


Wood gathered by the five villagers before they were allegedly ambushed by two armed men believed to be Indonesian soldiers near Kampung Danau Melikin in Sarawak.


KUALA LUMPUR: Five Sarawakians were held at gunpoint, bundled into a pickup, roughed up and kidnapped for ransom, allegedly by members of the Indonesian army who had encroached on Malaysian territory last week.

The five, aged between 15 and 64, were harvesting wood at the Wong Rangkai forest near Kampung Danau Melikin, 400m from the Serian-Kalimantan border, around noon on Dec 11 when they were approached by two men in battle fatigues.

The two were armed with 5.56mm Pindad SS-1 assault rifles, the standard primary weapon of Tentera Nasional Indonesia (TNI).
The New Sunday Times has learnt that the five were allegedly ambushed at the site, located near the WFM Melikin oil palm estate in Balai Ringin.

After securing them, the Indonesians forced them into their Toyota Hilux, which was parked nearby, and ordered them to drive across the Kalimantan border to the Indonesian command post in Sg Enteli.

The soldiers accused them of stealing wood from the Indonesian side.

Kuala Lumpur has sent Jakarta a protest note condemning, in the strongest terms, the alleged incursion and detention of its citizens by Indonesian security forces. The protest note was sent via the Indonesian embassy here on Friday.

Throughout the journey to their command post, the soldiers allegedly roughed up the five Sarawakians and threatened to shoot them if they resisted.

At one point, one of the two soldiers fired off two rounds to show that they meant business.

At the base, the Sarawakians were forced to admit to stealing wood in the Indonesian side and were ordered to strip. Their heads were covered with black hoods.

The NSU sighted the police report which alleged that the soldiers whipped them on their backs and legs, aside from punching them. The five were forced to collect water from a river for the soldiers.

Of the five, three were held overnight by the soldiers, while two, who are brothers, were released about 4pm, with a task.

They were allegedly told to inform the families of the hostages to hand over RM10,000 and two new chainsaws that very night.

They allegedly warned them against informing the Malaysian army detachment at the Balai Ringin Military Camp or other Malaysian authorities. If they did, their friends would be executed.

The duo, however, took a gamble and went straight to the Balai Ringin camp. A line of communication was established with the Indonesians and negotiations for the release of the remaining hostages began. This led to the release of the three men the next day.

The NSU was told that the Malaysian soldiers facilitating the hostages’ release from the Indonesians were forced to disarm before being allowed to enter the Indonesian command post.

A second meeting was set up at 2pm on Dec 14, over on the Malaysian side of the border, 200m from the Indonesian command post in Sg Enteli, to arrange for the return of the hostages’ pickup. This time, it was headed by the commander of the 3rd Infantry Brigade, headquartered at the Penrissen Camp in Kuching.

The Indonesians, all armed, were led by a military representative from the Indonesian consulate-general in Kuching.

A report on the incident said the Sarawak police and the Malaysian army had confirmed that the “snatch-and-grab” took place on the Malaysian side of the border. Additional reporting by Tasnim Lokman and Teh Athira Yusof

Cred-Straitstimes
Posted by Sabi sabi at 12:51 AM