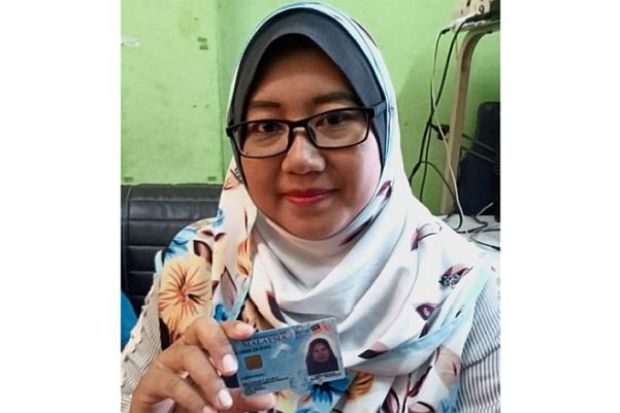 ISKANDAR PUTERI: Building designer S binti Rosli (pic) may have the shortest name in Malaysia – with her given name just a letter.

In contrast, her grandfather has a relatively long name – Rosli Ahmad Abdul Karim.
“When my father was a child, he always got teased by his friends,” said S.
“That’s why he wanted to give the shortest possible names to his children,” she said here yesterday.
“I am the eldest of four children but I am the only one named after a letter in the alphabet,” said the 31-year-old mother of three.
Her siblings – all sisters – are named Liz, 29, Maz, 18, and Hani, 15.
Despite just being a letter, S has always been comfortable with her name, vowing to never change it.
“When I tell people my name, especially when I am filling up a form, they do not believe me and think that it’s just a nickname.
“But when I show them my MyKad, they would give me a weird look and then, smile.
“I am very happy with my name because it is given by my father – even when I was teased at schools with names such as Superman or Supergirl.
“I do not mind because those characters are superheroes,” she said, adding that she believed her name was unique.
S, who holds a diploma from Uni­versiti Teknologi Malaysia, said a short name did have its advantages, especially during examinations.
“Due to my name, people thought that it would be easy for my husband to pronounce my name during our akad nikah (solemnisation of vows).
“But he had to recite his vows seven times – maybe he was nervous before the tok kadi,” said S who has been married for seven years.
Princess Aura Nurr Emily Amara Auliya Bidadari Nawal El Zendra binti Mohd Sufian, who is a year-old, has the longest name in Malaysia.