In the incident involving Food-talks Caterer and Manufacturer at Bedok North, 131 people were reported to have developed gastroenteritis symptoms after they ate food prepared by the caterer during a pre-school day camp.
Following a joint inspection, authorities said they found several hygiene lapses and poor kitchen habits.
These included evidence of a cockroach infestation and preparation of ready-to-eat food items one or two days before consumption. 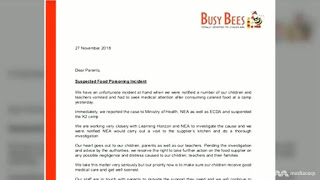 Customers who had placed their orders for these items have been contacted and "assisted accordingly", the spokesman said.
"We remain committed to adhering to stringent food hygiene and sanitation standards across our food and beverage operations," she said. Other lapses included a lack of proper segregation between raw and ready-to-eat food in the same chiller compartment and use of the same preparation table for raw food and ready-to-eat food items.
"While the exact causative agent could not be identified, the short incubation period from consumption of the food to development of symptoms, and the predominant symptom of vomiting, suggest that the outbreak was likely due to ingestion of toxins produced by bacteria in the food," said authorities.

SINGAPORE: FoodTalks Caterer and Manufacturer is under investigation after more than 130 children and teachers at a kids' camp fell ill after consuming food prepared by the caterer on Monday (Nov 26).
The Passport to P1 camp was held by Learning Horizon, a subsidiary of global childcare group Busy Bees. 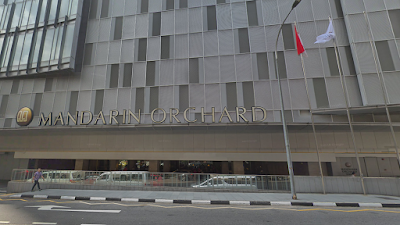 It is understood that the children affected were from several pre-schools under the Busy Bees group, including Learning Vision, Pat’s Schoolhouse, Brighton Montessori and Small Wonder.

In a joint statement on Tuesday, the Ministry of Health, National Environment Agency (NEA) and Agri-Food and Veterinary Authority of Singapore said they were investigating an outbreak of gastroenteritis "traced to the consumption of food" prepared by FoodTalks.

As of Tuesday, 131 people were reported to have developed symptoms of gastroenteritis, said the authorities, adding that none of them were hospitalised.
Of those who fell ill, 115 were children and 16 were teachers.