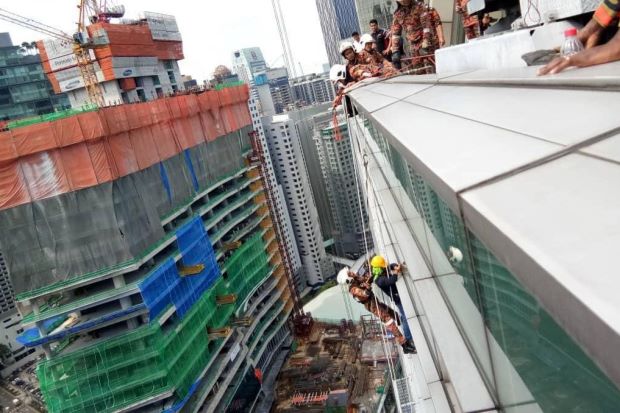 KUALA LUMPUR (Bernama): There was high drama when a gondola carrying two men cleaning a tall hotel building in Persiaran KLCC suffered a technical glitch on Saturday (Dec 22).
In the 10.30am incident, one of the victims was left hanging precariously in his harness on the 33rd floor of the hotel, while the other was trapped in the gondola on the first floor.
The Kuala Lumpur Fire and Rescue Department Operations Centre said the two Nepali men, in their 30s, were rescued at 11.49am.
“The Fire Brigade team used the ascending technique to conduct the rescue operation, where we lifted the first victim to the 34th floor through an access space.

“The second victim was rescued using an aerial ladder platform,” said the statement, adding that 13 personnel from the Jalan Tun Razak and Jalan Hang Tuah Fire and Rescue stations rushed to the scene after receiving a call at 10.57am.