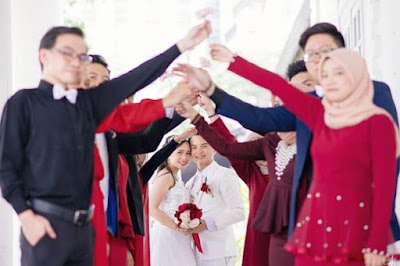 PETALING JAYA: A wedding in Sarawak recently certainly saw the concept of unity in diversity come to life in a church wedding with Muslim bridesmaids.
Pictures of the wedding on Dec 29 saw Sarawakian couple Sylvester Voon and Esther Joseph Kim getting married at St Joseph's Cathedral in Kuching, Sarawak.


Kim had six Muslim bridesmaids who wore dark red baju kurung and pink hijab.
Wedding photographer Ariffin Husain, who took the photos at the cathedral and a nearby courthouse,i said on his Facebook page that it is "the most unique wedding in 2018".
"You won't get to see this everyday... It's a church wedding, but all the bridesmaids are Muslims (sic).
"Berhijab lagi...memang sangat rare... (wearing headscarves, it is very rare)," he wrote.
Ariffin added that while Kim is from Sarawak, most of the bridesmaids are from the peninsula.
"This is what we call 1Malaysia... even though they are different in race and religion, this did not stop these good friends from celebrating one of the happiest days of their friend," he wrote.
He said it was very rare and sweet to see friends from various races respecting each other, expressing hope to see more multi-cultural ceremonies in the near future.
Ariffin told The Star that while he has been in this line of work since 2012, this wedding is the most special and beautiful for him.
"I hope that with the racial issues which happened lately, we can learn to put aside our differences, embrace each other with open arms and live together in harmony," he added.
His post received over 800 likes and shared over 250 times at the time of writing.
Many congratulated the couple and liked the photographs taken by Ariffin.
At the end of last year, mStar reported a heart-warming story of an Indian doctor who chose nine of his close Malay friends as his groomsmen for his wedding.