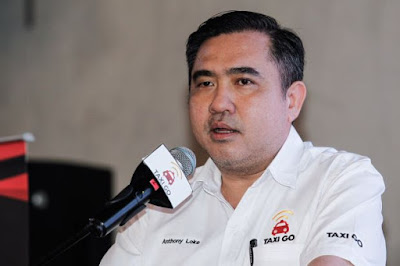 BATU GAJAH: Malaysia could potentially be a main producer of railway equipment with stronger collaborations with China, says Anthony Loke.
The Transport Minister said the government intends to continue its strong relations with China, especially in the transport industry.
Railway is one of the areas where we can see strong collaboration between Malaysia and China," he said.
Loke was visiting the CRRC Kuala Lumpur Maintenance Sdn Bhd Rolling Stock Centre here with Chinese envoy Bai Tian.
Describing their first visit to the plant together as a form of "Railway Diplomacy", Loke said China's investment into the local rail sector could result in Malaysia producing railway equipment for the South-East Asian region.
He said the current CRRC plant, which started operations about three years ago with a total investment of RM400mil, had the capacity to produce 200 train cars a year.
About 85% of its workforce are local.
"I'd like to invite them to further invest in Malaysia, so that they can increase the capacity and make this assembly plant as the hub in the region," he added.
Loke said the company shares the same vision of making Malaysia its hub to manufacture rolling stocks and train equipments to be exported to other countries in the region.
"We share this same vision and I hope to see 'Made In Malaysia' rolling stocks exported to the Asean region," he said, adding that there is huge business potential in the region as Asean member countries develop their own railway system.
Rolling stock refers to any vehicles that move on the railway including locomotives, coaches, and wagons.
Meanwhile, Bai Tian said Loke's vision of turning Malaysia into a rolling stock production hub may not be too far away.
"CRRC in China has echoed the Minister's desire to increase investment in Malaysia so I believe that there will be great potential and bright prospects coming from future Malaysia and China relations," he said, adding that trade between the two countries last year amounted to US$110bil (RM456bil) and about 32% of foreign direct investments in the country was from China.