PUTRAJAYA: The Pakatan Hara­pan government has unearthed what may be dubious dealings during the previous administration that caused the Malaysian Rubber Board (MRB) to lose close to RM1bil.
This includes the sale of 1,120ha of land in Sungai Buloh, known as Lot 471, for RM1.5bil, which was subsequently sold for a higher price.


Another questionable transaction involved the development of five facilities on MRB land, also in Sungai Buloh, where a breach in procedure resulted in about RM70mil in losses.
Primary Industries Minister Teresa Kok said that upon taking office, she had ordered MRB to undertake a full audit of all its assets and contracts.
These two cases were then reported to her.
Kok said that in October 2010, the Cabinet had given the then government approval for the land belonging to MRB to be sold to Aset Tanah Nasional Berhad (ATNB) for RM1.5bil.
ATNB is a special purpose vehicle under the Finance Ministry.
“However, it has now come to the knowledge of the board that the land was subsequently bought by Kwasa Land (which belongs to the Employees Provident Fund) for RM2.28bil in 2011. 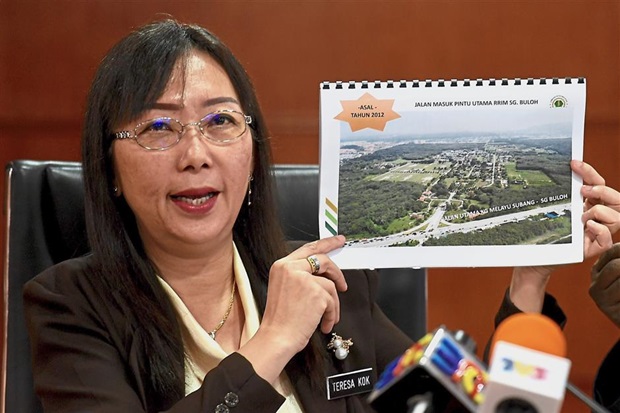 “MRB has therefore been short-changed, and there was a difference of about RM800mil.
“The board contends that it is lawfully entitled to the difference in amount and has reported this dubious transaction to the National Audit Department for a thorough audit and further investigation,” she said in a press conference here yesterday.
To a question, Kok said the then Barisan Nasional government had only instructed MRB to sell the land, and did not inform the board the reason why it was to be sold.
“The amount of RM1.5bil was also determined by the then government, which the board believes was below the market price,” she added.
Once news of Kok’s press conference came out online, former prime minister Datuk Seri Najib Tun Razak took to Facebook and Twitter to respond to her allegations.


This means that Kok has accused Barisan Nasional of forcing the government to sell government land to the government, which allowed EPF to make billions in profits for its contributors.
“That is so despicable of Barisan to look after its cronies, the EPF contributors,” he said sarcastically.
Najib said that Kok had alleged that MRB, a government body, lost RM780mil because ATNB – also a government body – had made the same amount when it sold the land to the EPF two years later.
“If Teresa Kok is still not happy, she can claim the RM780mil back from (Finance Minister Lim) Guan Eng,” he said.
Najib added that the RM2.28bil price tag for the land sold to Kwasa Land came to about RM18.70 per sq ft, a price which analysts then felt was reasonable and according to market value.
He also pointed out that Kwasa Land is a company fully owned by EPF, which had developed the land to open a new township, Kwasa Damansara.
Najib further explained that the development of Kwasa Damansara was among initiatives of the Greater Kuala Lumpur Strategic Develop­ment Project, announced under the 10th Malaysia Plan.
Meanwhile, on the questionable development of the five facilities, Kok said that sometime in 2012-2013, MRB decided to build a new laboratory, an office tower, a discovery centre, sports facilities and a complex for the transfer of technology that cost RM1.1bil.
However, checks with the records showed that instead of appointing a project management consultant, a project delivery partner (PDP) was appointed, apparently without proper board approval.
In February last year, the board officially terminated the PDP – KLIA Consultancy Services Sdn Bhd and KLIA Associates Sdn Bhd.
The project has since been halted.
“The current board that was appointed after the general election (last May) has recently discovered several dubious transactions by certain officers of the board over the project.
“The board lodged a report with the Malaysian Anti-Corruption Commission on Nov 27, 2018 for breaching procedures which resulted in about RM70mil in losses to MRB,” said Kok.
She said developers approached her as well as MRB to register their interest in developing the land belonging to the board, which has a sizeable land bank estimated to be worth between RM2bil and RM3bil, some in good and strategic locations in the city.
“I would like to say that we are not interested. Don’t come to us to propose joint ventures or projects. This is not our priority now.
“What we want to do is to bring back the glory days when our research work got world attention,” she said.
MRB’s current chairman Sankara N. Nair said the board asked the National Audit Depart­ment to investigate the land sale because it could not get access to ATNB data to lodge a report with either the police or the MACC.
“Once we have the auditor’s report on this, we will decide on the report,” he said, adding that the board has yet to get any updates on the status of the case with the MACC.
Neither the Auditor-General nor the MACC could be contacted for their response as at press time.