PUTRAJAYA: Only Health Ministry officers in uniform are allowed to take action against errant smokers, says minister Datuk Seri Dr Dzul­kefly Ahmad.
“The authorised officers will wear a uniform which includes a black vest, with the ministry’s name and logo emblazoned on it.


This is how you can tell if the officer is genuine or bogus,” Dr Dzul­kefly said.
The public, he said, should be wary of individuals pretending to be ministry officers and asking those caught smoking in public to pay a compound.
“The next six months is the grace period, so no compound will be issued by our enforcement offi­cers,” he told reporters after his ministry’s post-Cabinet meeting yesterday.
The ministry has just begun enforcing a smoking ban on all ea­teries, including outdoor ones, effective Jan 1.
Dr Dzulkefly said 1,453 written warnings were issued to indivi­duals caught smoking at eateries during the ministry’s rounds on the first day.
The ministry’s “educational en­forcement” activity on the first day covered 2,786 eateries, including 24-hour outlets, he said.
“We also sent out 7,451 campaign flyers, and verbal advice was given to 3,879 individuals,” Dr Dzul­kefly said.


Generally, the minister added that those who were issued with warnings were not aware of the ban.
“Although we have campaigned extensively, there were still some people who are clueless of the ban,” Dr Dzulkefly said.
“We will continue our educa­tional enforcement efforts to ensure that the public are truly aware of the new ban, while also ensuring that people are safe from the dangers of second-hand cigarette smoke.”
He praised Malaysians who had been proactive in ensuring the campaign was a success.
“We are touched by the overwhelming response particularly on social media.
“We want this campaign to create a new culture among Malaysians who are aware of their right to smoke at the appropriate places,” Dr Dzulkefly said.
In October last year, the ministry announced that smoking at both indoor and outdoor eateries would be banned starting 2019.
Those caught smoking in pro­hibited areas would be fined up to RM10,000 or face two years’ jail, while eateries found to have allowed customers to light up would be fined up to RM2,500.
However, smokers can still light up 3m away from these establishments. 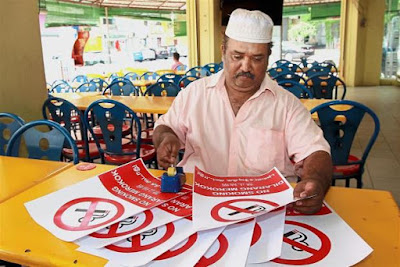