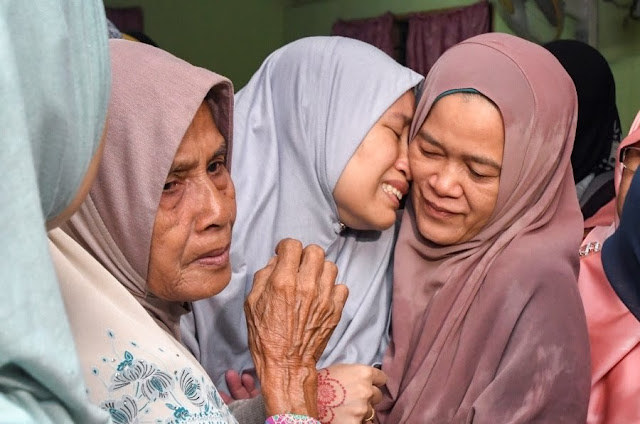 Nor Asilah (centre) said she and her husband had just celebrated their first wedding anniversary on March 23, and welcomed their child, Maryam Medina, just over two months ago.-

BACHOK: The wife of Muhammad Faezuan Nor Izuddin, 27, one of the victims killed in a road crash in Raub, Pahang, is reeling over the fact her husband won’t be able to attend his sister’s wedding today.
Nor Asilah Arahim, 29, said matching clothes had been stitched for the whole family, and they were all pressed and ready for the event.
“I received the last message from my husband via WhatsApp at 1am (Thursday), and five hours later, I was shocked as a police officer came over to inform my husband had died in a road accident,” she said when met at her home in Jelawat here early today.

Faezuan was among five family members killed when the car in which they were travelling in from Kuala Lumpur to Kota Baru collided with an express bus in the opposite direction.

Nor Asilah said she and her husband had just celebrated their first wedding anniversary on March 23, and welcomed their child, Maryam Medina, just over two months ago.

She said, however, her family had accepted the fate, and that the wedding of Faezuan’s sister would continue as planned despite the tragedy.

The remains of the victim arrived here from Raub at 1.10am today, and he was buried at the Kampung Kubang Chenok cemetery after funeral prayers at the Jelawat Mosque at 2.30 am.