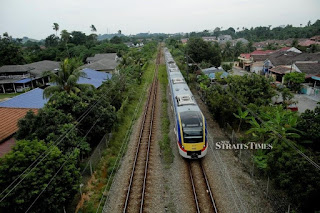 Photo shows a Komuter train. Two men were struck by a train as they tried to cross KTM Komuter’s railway tracks at Km 371.7 of the Sungai Buloh-Kepong route here, on Sunday evening.

KUALA LUMPUR: Two men were struck by a train as they tried to cross KTM Komuter’s railway tracks at Km 371.7 of the Sungai Buloh-Kepong route here, on Sunday evening.

The duo, believed to Myanmar nationals in their 30s, was killed at the scene in the 6.03pm accident, Bernama reported.

It is learnt that the men, who had trespassed onto the tracks, were trying to take a shortcut to a nearby area.

The train, carrying about 30 passengers, was en route from Kepong to KTM’s Sungai Buloh station when the incident occurred. No one on the train was injured.

“The driver immediately stopped the train when he realised that his vehicle had hit something…. (he later) saw the victims thrown onto the side to the tracks,” Keretapi Tanah Melayu Berhad (KTMB) said in a statement, last night.

It said that the accident was immediately reported to the police, who arrived on the scene shortly after.

“Passengers on the stopped train were transferred to another train to continue their journey,” KTMB added.

The two men’s remains were sent to the Selayang Hospital for post-mortems. 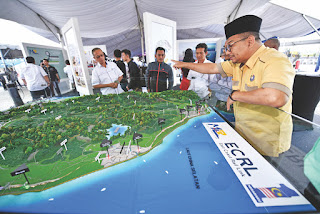 KUALA LUMPUR, April 11A man looks at a map of the East Coast Rail Link (ECRL) during a ground-breaking ceremony in Tunjong, Kota Baru, April 11, 2018.

— The East Coast Rail Link (ECRL) may finally see the light of day as a news report today claimed Malaysia and China will be signing an agreement on the project in Beijing tomorrow.

Sin Chew Daily cited a source in the Malaysian negotiation team who said the prime minister’s special envoy to China, Tun Daim Zainuddin, had arrived in Beijing and was negotiating the final details

The daily added that Daim will hold a press conference at the Malaysian Embassy at 2pm where he is expected to announce the outcome of his negotiations.
On Monday, Economic Affairs Minister Datuk Seri Azmin Ali had said that it was hoped that the negotiations would conclude before Prime Minister Tun Dr Mahathir Mohamad leaves for China for the Belt and Road Forum, which starts on April 26.
The Pakatan Harapan government suspended the 688km ECRL when it ousted Barisan Nasional in the general election last year due to its high cost.
Dr Mahathir, who had said that the project would leave the country indebted for an entire generation, last month said it could continue only if the price is right.
Last Friday, Finance Minister Lim Guan Eng raised expectations that the negotiations were going well when he hinted that the alignment of the rail line would be rerouted to benefit Negri Sembilan.
He had also said the project would go on if the cost of construction could be reduced from RM66 billion to RM35 billion.

Cred-malaymail
Posted by Sabi sabi at 1:16 AM No comments: