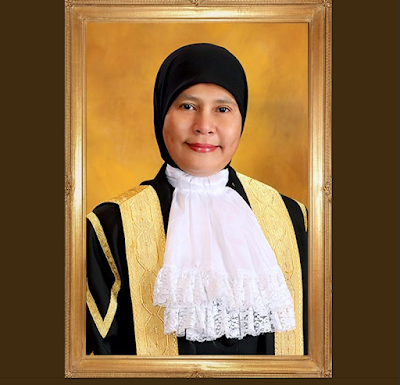 .KUALA LUMPUR, May 2 — Malaysia has its first female chief justice with today’s appointment of Federal Court judge Datuk Tengku Maimun Tuan Mat as the top judge of the country.

The Prime Minister’s Office made the announcement of the historic appointment today, after several weeks of speculation of who would be the next chief justice.

The Prime Minister’s Office said the Yang di-Pertuan Agong had assented to Tengku Maimun’s appointment as the chief justice effective from today upon the prime minister’s advice and after consulting the Conference of Rulers, in line with Article 122B (1) of the Federal Constitution.
The Prime Minister’s Office also said the ceremony for the swearing in and handing over of the letter of appointment before the Agong would be notified by the Federal Court’s Chief Registrar’s Office after receiving the Agong’s assent.
Tengku Maimun was last year reported to be aged 59, which means that she will be able to serve for some years before reaching the judges’ retirement age of 66 years old.
ADVERTISING
inReadinvented by Teads
According to the judiciary’s website, Tengku Maimun started off in the superior courts as a judicial commissioner at the High Court in Kuala Lumpur on October 2, 2006.
She was appointed a High Court judge on September 5, 2007, and later became a Court of Appeal judge on January 8, 2013 before being further promoted to be a Federal Court judge on November 26, 2018.
Since the country’s founding in 1963, all the 15 judges that held Malaysia’s top judicial post — previously known as Lord President before its rebranding as chief justice — before Tengku Maimum have been men.
This is not the first time that history has been made during Pakatan Harapan’s first year in government, in terms of the appointment of the highest-ranking judge in Malaysia.
Just about two months after PH took over federal power, then Federal Court judge Tan Sri Richard Malanjum was appointed on July 11, 2018 as the chief justice.
Malanjum was the first east Malaysian and also the first Sabah Bumiputera to be appointed as chief justice.
Malanjum retired on April 12, 2019 after hitting the age limit for judges of 66 years and serving out the additional six-month extension allowed under the Federal Constitution.
Despite his brief tenure as chief justice, Malanjum was hailed as being a staunch defender of the Federal Constitution and for implementing multiple reforms to the judiciary.
The Prime Minister’s Office today recorded its appreciation and gratitude to Malanjum over his service as chief justice. 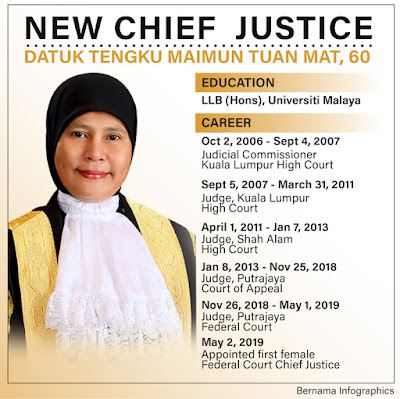 Cred-malaymail
Posted by Sabi sabi at 11:52 AM