142 foreigners arrested in raids in Gombak, Subang Jaya as another Nigerian jumped. 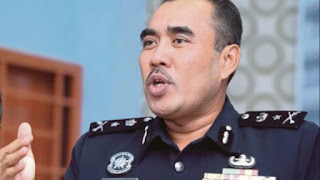 PETALING JAYA: A total of 142 foreigners, mostly Nigerians, were detained following several raids in Gombak and Subang Jaya, says the police.
Selangor CID chief Senior Asst Comm Fadzil Ahmat (pic) said the special operation was conducted at Kompleks Apartment Desa Aman Puri, Desa Jaya, Gombak and Vista Millennium Apartment, Bukit Puchong, Subang Jaya between 12.30am and 12.30pm on Sunday (June 16).
He said those detained were 128 Nigerians along with 14 others of various nationalities, including from Pakistan and Indonesia.
They were detained under Section 6(i)(c) of the Immigration Act 1953 for not having travel documents," he said when contacted Sunday.
SAC Fadzil said the operation was conducted as social ills and crimes among Africans in Selangor were increasing.
"Besides cheating syndicates, suspects from Africans countries are also involved in armed robberies and other crimes.
"We are deeply concerned, thus the operation is conducted to track down and gather information on the suspects," he said.
Among those detained were four men and a woman from Nigeria, who were suspected of operating a love scam syndicate at Apartment Desa Aman Puri.
"We also seized three laptops and six mobiles phones," he said.
Another Nigerian man had also jumped from the third floor of the same apartment in an attempt to evade the authorities, he added.
"He had broken his foot and he is currently being treated at Selayang Hospital," SAC Fadzil said.
He said a total of 536 Selangor CID personnel were involved in the operation along with 98 other police personnel from various units as well as 12 Selangor Immigration personnel.