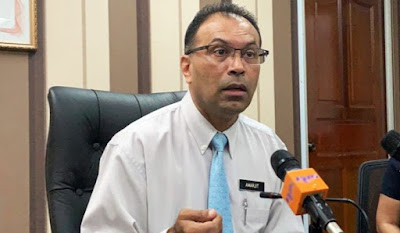 
KOTA KINABALU: Sabah Water Department director Amarjit Singh, whose appointment was ruled illegal by the Kota Kinabalu High Court yesterday, has been told to continue coming to office by the state Cabinet.
Speaking to reporters here today, Amarjit said despite the court ruling, Chief Minister Shafie Apdal rang him up twice yesterday and insisted that he should come to work as usual.
“So, I told him, OK. Even the minister (Infrastructure Development Minister Peter Anthony) told me to go to work because the official judgement has not been released yet,” he said.


He acknowledged that the state Attorney-General’s Chambers had contacted him to inform him about the ruling, which would be made official tomorrow.
Only then, he said, would the A-G’s office decide on the next course of action.
Amarjit pointed out that in the ruling, Judge Ravinthran Paramaguru only ruled that his appointment to the post contravened Section 3 of the state’s Water Supply Enactment 2003.
“He didn’t say I should be removed from my post. So, I can continue. The power to remove me from my post lies with the Public Service Commission. Only they can suspend me or remove me,” he said.
Under the clause, senior posts within the Water Department must only be filled by members of the public service.
Amarjit, who never served in the civil sector before, was appointed to the post in August last year, some two months after Warisan took over the Sabah state government.
Former Sabah chief minister Yong Teck Lee and a Tawau businessman filed the suit against the appointment last March on the grounds that it breached the state’s law.
They also believed that Amarjit was appointed due to his position in Warisan, the party leading the Sabah ruling coalition.
Amarjit is the secretary of the Putatan Warisan division.
He was detained in 2017 by the Malaysian Anti-Corruption Commission (MACC) together with Shafie, who is also Warisan president.
He was freed on RM15,000 bail after spending six days in MACC custody.