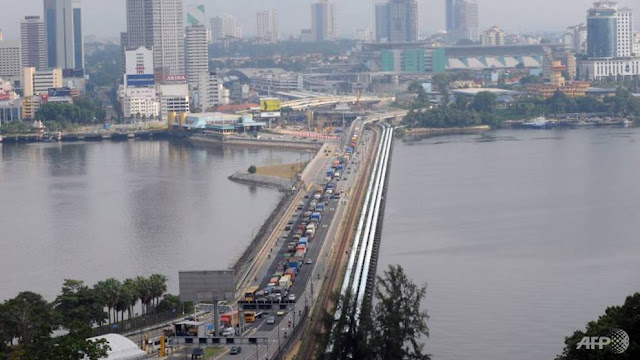 photo of a general view of the Causeway from Singapore to Johor Bahru. (Photo: AFP/Roslan Rahman)


PETALING JAYA: The Health Ministry has confirmed another case of novel coronavirus (2019-nCoV) infection in the country, the fourth so far.
Health Director-General Datuk Dr Noor Hisham Abdullah (pic) said the case did not have any connection to the three other cases reported earlier.

The latest case involves a 40-year-old man from Wuhan, China. He came to Johor Baru on Jan 22 via a bus from Singapore, together with 17 other tourists from China.

“The man started exhibiting signs of a fever on Jan 23 and the next day he sought treatment at a private hospital there, ” he said in a statement on Saturday (Jan 25).

“Tests to trace and verify the case have been sent to the Medical Research Institute.
“On Saturday, the National Crisis Preparedness and Response Centre (CPRC) received a report that the sample taken from the man was positive for 2019-nCoV, ” Dr Noor Hisham said.

He added that the man was still suffering from fever and a cough, but was otherwise in a stable condition.

“The State Health Department immediately went to work to track down the 17 others in the tour group to administer health checks.
“Initial screenings revealed none of them have any symptoms of the virus.

“Clinical samples have been taken from them for 2019-nCoV tests and verification at the Sungai Buloh National Public Health Laboratory, ” he said, adding that all of the 17 have been placed under observation and quarantine orders while awaiting the test results.

The three earlier cases were also China nationals from Wuhan, family members of the 66-year-old Chinese patient confirmed in Singapore recently.
The victims were the 65-year-old wife of the patient in Singapore, and their two grandchildren aged two and 11 years old.

The patients were known to had been part of a group of 10 that had travelled to Singapore from Guangzhou on Jan 20.
While in Singapore, the 66-year-old man and his son were confirmed to have the virus while the rest showed no signs.