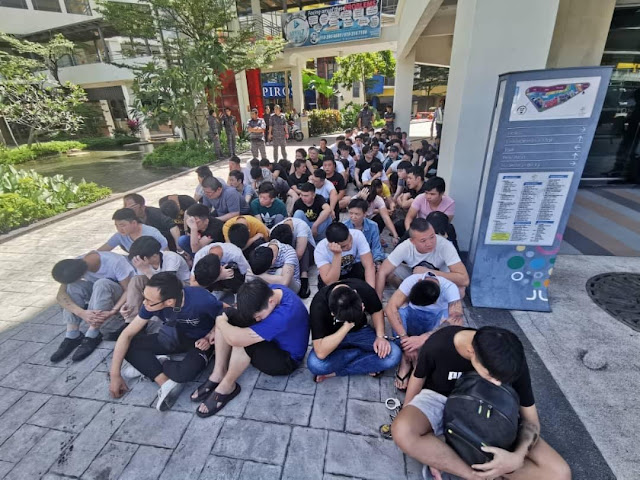 KUALA LUMPUR: A total of 87 China nationals were detained for suspected involvement in an online investment scam following a raid in Puchong, marking the first day of the big-sweep against illegals nationwide.

Immigration Department director-general Datuk Khairul Dzaimee Daud said simultaneous operations against illegals are being conducted around the country following the conclusion of the Back For Good (B4G) repatriation programme on Dec 31.

On the Puchong raid, he said those detained – 79 men and eight women – were rounded up after raids were conducted on five residential and nine office units at a building in Puchong yesterday.
“We also seized six PCs, 33 laptops and 203 mobile phones from the various premises.

“The suspects were detained as they are believed to be running an investment scam.
“At the time of the raids, the computer monitors were showing various investment schemes, including forex and cryptocurrency, ” he told a press conference yesterday.
The units raided were also believed to have been used as training centres for syndicate members, he added.

“We discovered various scripts and manuals for the members to follow. They are trained on how to approach customers through online applications, ” Khairul said.
Checks on the suspects’ online conversation showed that there were customers who were cheated and suffered losses from the investment schemes offered by the syndicate, he added.
The syndicate, according to Khairul, had changed its modus operandi by renting residential units instead of renting a big commercial building, in an attempt to evade detection.

“The units were equipped with Internet access.
“We also received information that a particular syndicate had purchased RM24,000 worth of SIM cards recently, ” he said.
The suspects, who did not have any personal travel documents, aged between 21 and 36, will be detained at the Bukit Jalil Immigration Depot for 14 days pending further investigation, he added.
The operation was conducted with the cooperation of other agencies including the police, the Malaysian Communications and Multimedia Commission and Bank Negara.

On another matter, Khairul said a total of 190,471 illegal immigrants have registered for the B4G programme.
“So far, 165,041 illegals have returned to their home countries.
“The rest will return based on their respective flight schedules, ” he said.
For this year, one of the department’s top targets is detaining at least 70,000 illegal immigrants, he added.

“We hope to improve our level of service, especially for counters located at the country’s entry points. We hope to increase our efficiency in terms of management through the 100% e-payment initiative, which is expected to start in June as well as the National Integrated Immigration System, ” said Khairul.