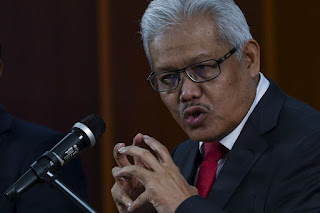 PUTRAJAYA: The status of cannabis as a dangerous drug in Malaysia remains unchanged despite the United Nations’ recent decision to reclassify the substance, says Datuk Seri Hamzah Zainudin (pic).

The Home Minister said cannabis and cannabis-related substances would still be classified as a controlled item under the Dangerous Drugs Act, which carries the death penalty.

The recent decision by the Convention on Narcotic Drugs does not affect the status of cannabis in the country.

“Anyone found guilty of breaking the law will be punished accordingly, ” he said in a statement.

On Wednesday, the UN had voted to remove cannabis from a list that categorised it as one of the world’s most dangerous drugs.

The move came following the recommendation by the World Health Organisation that research into its medical use was made easier.

Hamzah said the reclassification did not mean control on cannabis was loosened at international level.

“Internationally, cannabis is still tightly controlled under Schedule 1 of the 1961 Convention.