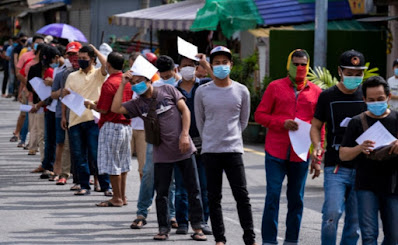 PUTRAJAYA: It has been proposed that big corporations be allowed to bring in foreign workers on condition that they finance the repatriation of illegal immigrants detained at immigration depots.The hiring of foreign workers in the metal, scrap and used item sub-sector was also recommended to be scrapped.

These were among proposals discussed at the inaugural Home and Human Resources ministers joint committee meeting held here yesterday.

Home Minister Datuk Seri Hamzah Zainudin said the proposal to get major companies to hire foreign workers with the understanding that they pay for the home passage of illegal immigrants would be raised in the Cabinet soon.

“The ratio will be one-to-one. If a company needs to hire five foreign workers, we will allow them to do so provided they pay to deport five illegal immigrants in Immigration depots.

“This is one way that we can resolve the issue of overcrowding in depots, ” he said after co-chairing the meeting with his Human Resources counterpart Datuk Seri M. Saravanan.

Hamzah explained that companies could also opt to hire those in detention centres but said that only 15% of the population there were employable.

“There are illegal immigrants in the depots with criminal records and we don’t think they are employable. Also we are of the opinion that those with families should be deported, ” he said.

On the hiring of foreigners in the mentioned sub-sector, he said those currently hired would ceased to be employed within the next three years.

“Foreigners currently hired in the sub-sector will not have their work permits renewed, ” he said.

There are currently 21,154 workers employed in the sub-sector with 2,931 being foreigners.

The committee also agreed with the Human Resources Ministry’s proposal to postpone the implementation of the multi-tier levy, which was to come into effect on Jan 1, to July 1 next year.

Hamzah said the meeting agreed that the levy rate in the multi-tier levy system be reviewed to ensure its effective implementation.

Saravanan said the economic scenario due to the Covid-19 pandemic called for the need to review the multi-tier levy mechanism.

“With the delay in the mechanism, we call on industries to restructure their businesses especially in the aspect of labour, ” he said, adding that priority should be given to locals.

On the foreign workers-illegal immigrants recalibration programme, Saravanan said the Labour Department received 134 applications from employers on the the hiring of 19,734 foreign workers.