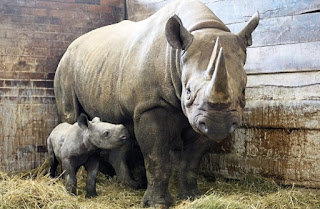 Pics from thestar
A Czech zoo has welcomed a critically endangered eastern black rhinoceros baby that has taken the name of Ukraine's capital Kyiv in honor of that country's resistance to invading Russian forces.

The rhino was born early on March 4 in the Dvur Kralove zoo, a rare occurrence for the facility even if it has the most rhinos belonging to the subspecies.

“The name is another expression of our support for the Ukrainian heroes,“ zoo Director Premysl Rabas said.

Kyiv’s mother Eva has been taking care of him in a best possible way, the zoo said, with the baby gaining 1 kilogram (2.20 pounds) a day. It currently weighs about 50 kilograms (110 pounds) .

Poaching has reduced the number of the eastern black rhinos living in the wild to around 800. The Czech park has 14.

Only three other such rhinos have been born in other zoos around the world in the last year.

A total of 47 eastern black rhinos have been born in Dvur Kralove since the park received the first one in 1971.

Many of them are now in various zoos around the globe but nine have been returned to Rwanda and Tanzania to live in the wild.